** The words in italics and those that are crossed out are personal notes in this English version. Chiefly, in order to make a point if saying and talking about “painting” or otherwise “the painting”.

Vauville.
There it is. The word on the sign. *

Alone with you both, painting and body (body as substance). To be in front of a painting, just like that, and of a body, attached to the preceding. This is not only gesture, since it would be closer to the line, but also we find body, which is closer to color. Jointed to these two -gesture and body- there is the intention that, beyond the idea of painting mere plants, becomes a body merged with the painting. This body no longer cares that much about the branches or leaves (3), instead it is only guided by painting, which is color and substance. Hence, it can seem that one paints “unintentionally” until she decides to cease doing so. She lets it happen. Time also happens, but more importantly she lets (something) happen. Allows to happen.

Two. My phantom is not the same as your phantom. Between these summits, there it is, my hometown.

Three. A difficulty with the current days, of course. The old Spanish language, of course not. The language of painting, painting, is not old Spanish. The motif can be the same as in past times (a tree, a flower, a few lemons) but if motivation and intention are held by the hand of the painter and her painting, by and through her act (act as eagerness), then the motivation, if it is there, is always current. And the intention, if it is there, is always present.

The motif is the topic that each one uses as an excuse to paint.
The motivation is an impulse that is still constant in the materialization of the thing.
The intention within the art is fundamental and is not addressed to the motif, but to the painting.

The painting is a pleasure when it is regarded (when it is not disguised) and this does not always happen, because it is sometimes covered by other purposes. In order to make, the intention has to match the means and times utilized. If these become very separated from one another, then there is no the painting, nor art. No thing would be entire, and the painting has to come up all at once. Not once, but “at once”. Although it would have disruptions on the inside, although the movement would never end (4). A hug, for example, is similarly received. Or a slap. The painting, however, lasts longer.

Here we would finish.
I mean, before the style, still nowadays, there is the painting and its language, and this is to date: that they exist. The matter of the painting today… is another topic.

Immediately.
Courbet picks a fragment of a Cézanne sky. A piece of sea, a blue and dense volume of painting. Say Courbet of Cézanne because I do not want to talk about influences. A landscape breaks a picture in half.

Casado (5) makes a difference between experience and experimentation, which are to be understood as both polar and complementary elements. The former has more to do with the existence of the artist and his or her surroundings. The latter emerges through the painting as the thing of painting. He says that experience is suffered and that experimentation is performed. A painting can be done in a way that looks towards its inside – towards its own language- or otherwise towards its outside – towards the world-.

We all know about the style of the moment we live. The manner of that moment, that depends on the artist. The art has to clearly propose. We tend to poeticize using the private and involuntarily escaping-from-the-cold technique. Claim, it is warm! It is a contrast between cold and warm colors.
We have to state which is the present.

Does anybody know what he or she will want to say, in the case of wanting to say anything?

We will not reach the final response at or from an exhibition, but the opposite.
Therefore, what is missing, is it a good outline, is it more poison, is it to come down to hell or is it the lack of lack? It is what one calls figure and the other image. 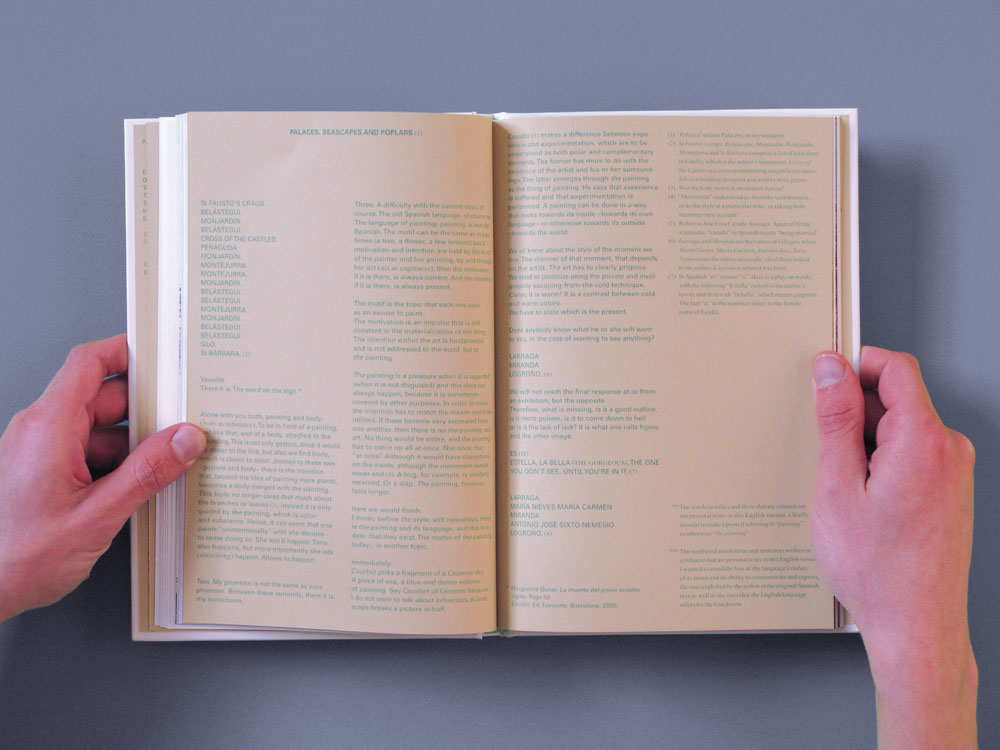 *** The numbered sentences written in a different font are personal notes in this English version. I wanted to avoid the loss of the language’s riches, of its forms and its abilities to communicate and express, the ones exploited by the author in the original Spanish text as well as the ones that the English language offers for the translation.

(1) “Palaces” means Palacios, as my surname.

(2) St Fausto’s crags, Belástegui, Monjardín, Peñaguda, Montejurra and St Bárbara comprise a list of hills close to Estella, which is the author’s hometown. Cross of the Castles is a cross remembering magnificent times. Silo is a building designed and used to store grains.

(3) Was the body worried about them before?

(4) “Movement” understood as from the verb to move, or as the style at a particular time, or taking both meanings into account?

(5) Refers to Jose Luis Casado. Apart of being a surname, “casado” in Spanish means “being married”.

(6) Larraga and Miranda are the names of villages, while María Nieves, María Carmen, Antonio José, Sixto Nemesio are the names of people; all of them linked to the author. Logroño is where I was born.

(7) In Spanish “es” means “is”. Here is a play on words with the following “Estella” (which is the author’s town), and then with “la bella”, which means gorgeous. The last “it” in the sentence refers to the female name of Estella.

** The words in italics and those that are crossed out are personal notes in this English version. Chiefly, in order to make a point if saying and talking about “painting” or otherwise “the painting”.